Welcome to the new Coventry Arts Umbrella Club archive site, as part of the Hobo (Coventry Music and Arts Magazine) Archive site, documenting the Coventry Music Scene in the 70's (and before and beyond). Coventry is noted for it's contribution to popular music via Two Tone, Pete Waterman, The Sorrows, Frank Ifield, Vince Hill, King, The Primitives, Indian Summer, Dando Shaft and more.

These musicians didn't develop in a vacuum and the were many more who didn't make it. Neither was the Cov Scene just about music. Literature, art and politics feature in it it as well.


The rest of the material is on this suite of Blogspots -

Hobo Coventry Music Archives ( The main blog)
Hobo magazine archives, Coventry music features, other alternative Coventry mags and much more. (In development). Although this is a main part of the Hobo blogs, it's one that still requires a lot more input. Slowly getting it all put on!

Coventry Music Articles by Pete ClemonsHouses Peter Clemon's Rock of Ages columns and Coventry music articles for the Coventry Telegraph which charts gigs in Coventry (local bands and famous bands) from 1960 onwards. In addition I'm adding, Coventry Hits, Pete Waterman archives to this section and my 1971 diary of Coventry gigs as a resource.

Coventry Folk Club Scene
This blog with house copies of Pete Willow's Folks Magazine from c 1978 and articles from it. My archive of material from the Coventry Folk Scene in the 1970s and other relevant articles, You Tube and links.

Coventry Discos, DJ's, Venues, Recording studios, Music Shops, Music Agencies in the 70's
As it says on the tin, articles on the other aspects of the Coventry music scene, including Silk Disco, Sunshine  Music agency, Q Artistes, Pete Chambers and his initiatives and much more.

Lanchester Arts Festival and Gigs in the 1970's
Now Coventry University. Do you remember all those bands and artists who played the Lanch. This site tracks a lot of them with youtube footage and more.

IT (International Times) had a section of Arts labs and Centres and in 1969, the Umbrella Club got a mention - 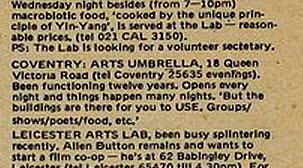 Coventry Arts Umbrella (or the Umbrella Club) as we all knew it, played an important role in that development, so much so it deserves it's own focus - this blog.

Opened in Little Park Street, Coventry in 1955 by some of the Goons (who were performing at Coventry Belgrade Theatre), it had associations with Philip Larkin, Two Tone and housed Coventry's first folk club.

More of The Umbrella's seminal role in the Coventry music and arts scene will be revealed in these pages, which I shall start uploading very soon. Bookmark and revisit and watch it grow.

Note also, that although the Umbrella is not the force it once was in 50's, 60's and 70's, the club has survived in some form and small group of early members still meet at members houses and recently published a pamphlet of poetry, (Visit their site Here http://www.umbrellaclub.org.uk/index.php )
and we shall mention their activities on here as well celebrating the work of the Umbrella in its primary years. Actually this link is not working now - will check if that's permanent!

'Umbrella', the clubs respected literary journal from 1959 - 61 gets a mention in Philip Larkin's biography (albeit a footnote). The journal might be 'obscure' as it says in the Larkin bio, but we bring it back to life on this blog with two pdf versions and Larkin's essay on his poem about Coventry - Not the Place's Fault.

Special mention must be made of Terry Watson, an English teacher at King Henry V111 school, poet, editor of Umbrella magazine and whose unstinting dedication to the Umbrella ensured it's continuation through the decades.

The Umbrella's story begins in 1955 with the opening of the premises in Little Park Street (next post), through the publication of Umbrella Literary magazine, through the move to premises at Queen Victoria road in 1961 - hosting Coventry's first folk club, through to the hippy era with the Transcendental Cauldron - a Underground arts fest in 1969 (which was my first experience of the Umbrella) through their expulsion from Queen Victoria Road owing to a redevelopment programme and a new base in the Charterhouse. (Umbrella was on the corner where the white dot is - now British Chamber of Commerce.) 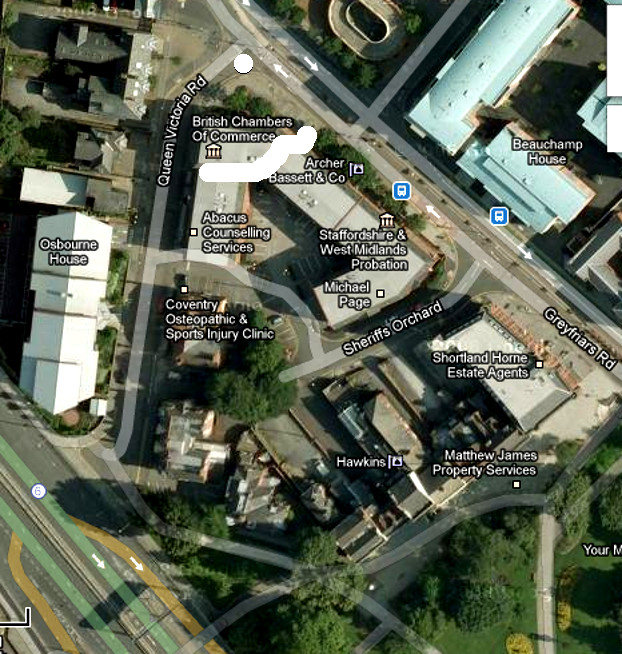 ABOUT UMBRELLA CLUB - Umbrella information sheets from the early 1970's on a pdf file here
https://docs.google.com/viewer?a=v&pid=explorer&chrome=true&srcid=0B86kZ7RP6OWKMjk0NmZhODgtNGJhOS00NmI0LWFmM2QtMzI2M2FhYmJkMWQy&hl=en_US

Photos and Memories
The material on this site is from my own archives, collected when I was a member and running the Live Music nights etc. If anyone has any photos of the Umbrella they are willing to share with us - either at Little Park Street (from inside) or from Queen Victoria Road (inside or out) or any documents that would be of interest - please let us know at hobozine@googlemail.com
Also share your share your memories with us in the comments.


Coventry History Centre
For research - you can find further and more extensive material in Coventry Archives, Herbert Museum  including copies of Umbrella Magazine, Programmes, press cuttings and features and more. 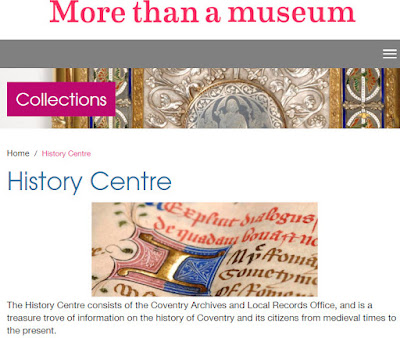 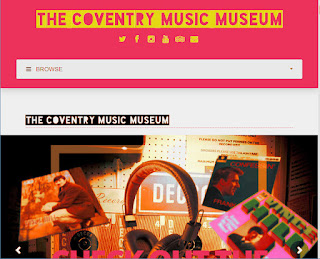