The Umbrella Club - Who Gives a Jot?

Jot do! Jot is blogger site to "A place to record information. Facts, Data,Trivia, Ephemera, Knowledge from any source - Letters, Diaries, Manuscripts, Journals, Notebooks, Recipes, Anecdotes, Reports, Art, Files, Snapshots, Documents, Formulas, Catalogues, Press cuttings, Memoirs, Tales, Eyewitness accounts ('I was there'), 'I once met...', Quotations, Found Objects & Total Trivia" and can be found here http://www.jot101.com/2014/07/the-umbrella-club.html with this link going specifically to their post on the Umbrella Club. 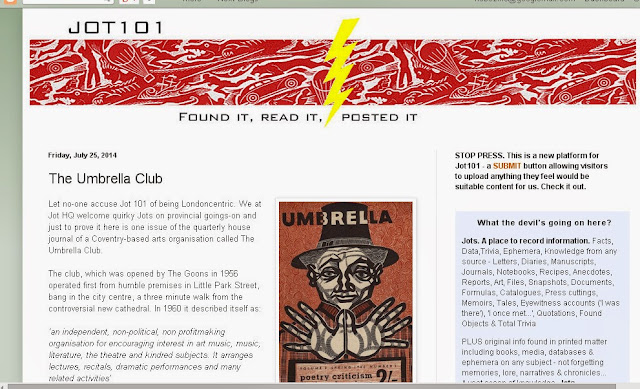 Nice that Jot have given space to the Umbrella Club. The article focuses on an issue of Umbrella Magazine, the pdf of which can be found on this site (along with some other issues of the Umbrella's Literary magazine from the late 50's / early 60's.

It describes the early incarnation of the Umbrella Club at Little Park Street in the 50's as -
In 1960 it described itself as:

and the editorial policy of the magazine as stated in the magazine as requesting material that ‘paints a portrait of life in the Midlands, and which reflect or interpret: such problems as labour relations, race relations, the world of the teenager, the changing patterns of family life in a mobile society and the attitudes of the citizen of today to the established institutions of the past’.

Interesting article in itself and interesting and potentially useful site in general for researchers or anyone who is just curious about all manner of things!

Posted by Coventry Music Scene Archive at 8:39 AM