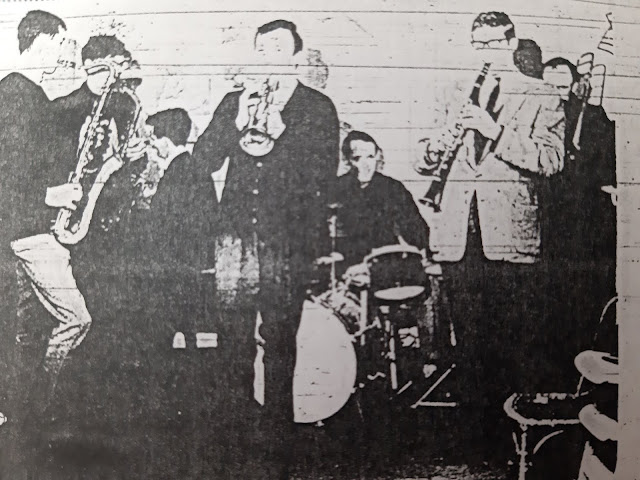 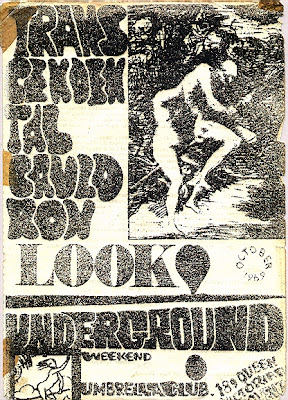 January 1966. It's a good sketch of the Umbrella in those days when the Umbrella pioneered an early folk club in the city leading a brilliant folk scene in the 60's. Music was dominated by Classical recitals and Jazz and poetry was always big.

In October 1969, when I first went the Coventry arts Umbrella club, Jo Petter, the Drama organiser, created a game changing mini festival for the Umbrella called the Transcendental Cauldron, a three day all night festival that emulated the kind of events happening at places like Drury Lane Arts Lab where Bowie started out. It was my introduction to the Coventry music scene but had alternative films, art exhibitions etc. The programme can be seen in the flyer posted here and included last fair deal, Asgard and Dando Shaft.

It was followed a month later by the Music Marathon and after which Al Docker and I put on regular Friday band nights for a year and half featuring the cream of local or regional bands. There was a shift away from jazz at this stage but this article is a good representation of the Umbrella in 1966 and shows it be a place where people could get involved and organise their own events, as both I and Al Docker did in 1970 / 72.

The next stage of the Umbrella had Neol Davies, Kevin Harrison, Indian Summer, Asgard playing there. 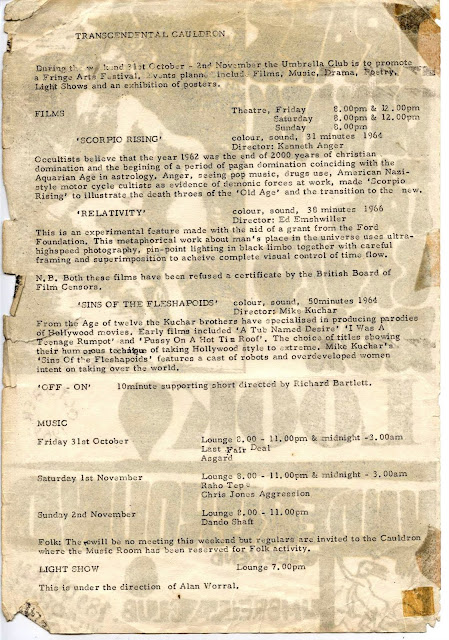 Where in Coventry could a theatre, coffee bar, exhibition room, studio, photographic dark room and music room all be found under one roof – or rather, under one umbrella?. The answer is, at the Umbrella club, Coventry's Art Centre located in a small terraced house in Queen Victoria Road.

Behind its modest exterior something lies that lovers of the arts find valuable. They discover companionship and enjoyment in appreciating with others the many cultural topics which the club embraces. Some have already discovered their worth, while others renew it.

Here is a unique club. It is a meeting place where all classes and all races can enjoy one another's company and share common leisure interests.

It has been said by the ill informed that it is a club of misfits. These surely are to be found in all walks of society but no more so at the Umbrella Club.

A member will say that it is up to the individual to cultivate friendships and to show enthusiasm for a form of art that he would like to appreciate – whether it is classical music, jazz, art, drama or any other.

It was ten years ago last month that Harry Secombe unfurled a large black umbrella and proclaimed 'The Umbrella, long may it reign' at the clubs official opening.

In a small Victorian house in Little Park Street the club steadily grew and began to make an impact in the city. The turning point came in 1961, only six years after its formation, when the headquarters became due for demolition.

After much fruitless searching, a terraced house at Queen Victoria Road was made available by the council. But it was in a shocking condition. Members worked day and night to prepare it for the opening.

Since that day, the Umbrella Club has flourished and despite many financial set backs has achieved, and is still achieving, it aims.......

(b) To arrange exhibitions, recitals and general discussions

And most important of all, for the club to be a source of encouragement and enjoyment of the arts.

All this has come to fruition within a span of ten years but only due to endless hard work and enthusiasm of its members. Without enthusiasm this club could, like an umbrella, have folded. But it kept going without financial support, apart from a small grant from the arts council.

The club is unlike any other in Coventry. It is neither a youth club nor a community centre. It is also not a club devoted to professional people. It is an arts centre for everyone, irrespective of their profession, their colour or their creed.

There are no restrictions, but instead, complete freedom of choice for each member to choose how his time will be spent there. The beauty of such freedom is the ability one gains to 'discover' oneself.

Talents, hitherto hidden deep, will rise to the surface as shyness or nervousness disappear in friendly conversation or over a game of bridge. You may find that you cup of tea is in the drama line, perhaps acting, or even helping to produce. On the other hand, there is a film group, which not only shows films regularly but has begun to make them.

Debates and discussions take place on a variety of topics including religion, politics, poetry, theatre, television, travel. The range is almost limitless.

Exhibitions are an accepted part of club life. Many members are keen artists who submit pictures for local exhibitions (the last one was a members display at the Herbert Art Gallery). Nancy Upshall and John Budgett, to name but two, are well known Coventry artists who have exhibited at the club.

And what of music? The works of the great composers are regularly played and discussed. Operas, Continental, Flamenco, or music from far away lands is enjoyed and appreciated by many.

If you are a jazz enthusiast there is plenty of enjoyment for you. On Wednesday's this circle gather round to listen to records. Occasionally the Umbrella Club Jazz Band gives a performance.

The visual arts group provides members with some very interesting subjects for discussion. Recently an exhibition boards was given. The cosy music room often holds the motoring enthusiasts or those who want to play their favourite recordings.

As leader of the club, Terry Watson, who is a teacher at King Henry VIII School, said 'Those who come here seem to 'find' themselves and something for which they were perhaps looking'.

He went on 'This club is for everyone who would like to enjoy the arts. We are all amateurs and believe that what would kill it most of all would be the existence of professionalism. We want to keep the atmosphere the way it is even if we one day have another and better building. The building is not really the important thing, it is the people who matter' 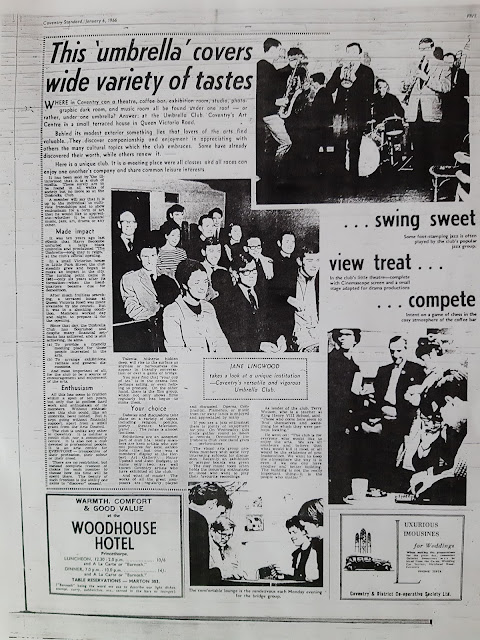